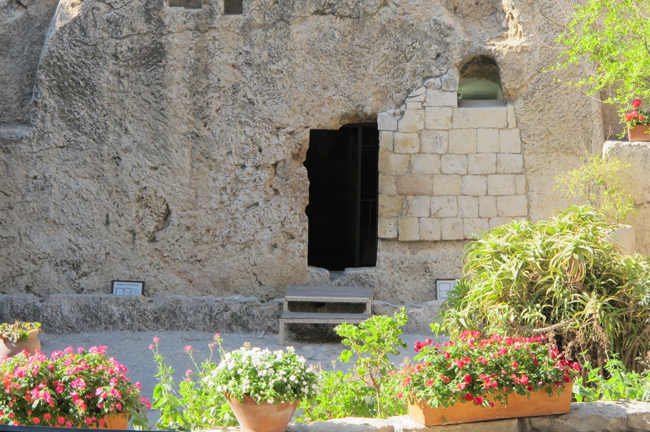 Jesus, once more deeply moved, came to the tomb. It was a cave with a stone laid across the entrance. “Take away the stone,” he said. “But, Lord,” said Martha, the sister of the dead man, “by this time there is a bad odor, for he has been there four days.” Then Jesus said, “Did I not tell you that if you believe, you will see the glory of God?” So they took away the stone. Then Jesus looked up and said, “Father, I thank you that you have heard me. I knew that you always hear me, but I said this for the benefit of the people standing here, that they may believe that you sent me.” When he had said this, Jesus called in a loud voice, “Lazarus, come out!” The dead man came out, his hands and feet wrapped with strips of linen, and a cloth around his face. Jesus said to them, “Take off the grave clothes and let him go.” (John 11:38-44)

This is the sign that follows the statement Jesus makes about himself in verse 25 (I am the resurrection and the life). Having told Martha that he is the resurrection, Jesus calls Lazarus from the tomb where he’d been buried for four days. At the beginning of the chapter, Jesus tells his disciples that Lazarus got sick so that God’s glory could be seen in his illness (and death); similar to the man born blind in John 9. The next time we are faced with insurmountable circumstances instead of asking why, perhaps we should ask how. How can God be glorified in what we are facing? Maybe there is a direct connection between our belief and our ability to see the glory of God. We are told that many did in fact believe in Jesus once they saw this sign. We are also told that some went and ratted him out to the Pharisees (John 12:9-11). The religious leaders were so bent out of shape they talked of killing Lazarus. What if they had killed Lazarus? I bet Jesus would have just raised him a second time.

Some people say ‘I will believe it when I see it,’ but according to Jesus this line of reasoning is backwards. The reality is when we believe it, then we are able to see it. Yuri Garagan was the first person to travel into space and orbit the earth. His atheistic perspective led him to believe and say that he saw no evidence of God while he was in space. Another astronaut, Frank Borman, recounts a different experience from space. Looking down on the earth from 250,000 miles away, Borman radioed back a message, quoting Genesis 1, “In the beginning, God created the heavens and the earth.” As he later explained, “I had an enormous feeling that there had to be a power greater than any of us; that there was a God, that there was indeed a beginning.” Two men seeing the same thing, coming to very different conclusions. The same can be said for those who witnessed the signs Jesus performed.

So, we see divine power on display in Jesus. We see him doing what no one who is merely human can do. He must be more than human. John’s purpose statement for his book “But these things are written so that you will believe that Jesus is the Christ, God’s Son, and that believing, you will have life in his name.” (John 20:31) is an echo of what Jesus says here, “…for the benefit of the people standing here, that they may believe that you sent me.” If Jesus is powerful enough to raise a dead man to life, is he not powerful enough to help you with whatever you are facing today? One thing is for sure, if you are reading this post then your circumstances are not yet as dire as Lazarus‘ were when Jesus came to him. It is my hope and desire that you are overwhelmed with the signs Jesus performed and believe that he is God’s answer for your life’s questions.

This is the final sign offered by John. In his mind, the seven signs are sufficient to create within us a trust in Jesus as the Christ, the son of God. In Acts, another book in the Bible, we are told about three responses people have once they heard about the resurrection (Jesus’ resurrection):

When they heard about the resurrection of the dead, some of them sneered, but others said, “We want to hear you again on this subject.” At that, Paul left the Council. Some of the people became followers of Paul and believed…” (Acts 17:32-34).

It seems to me that these are the three possible responses available to us as we listen to the message about Jesus.

1. We can reject and/or ignore the message.
2. We can have our interest awoken and desire to learn more.
3. We can believe and become followers.